The Trouble with Winning: CSX and Gulf Coast

It’s been 16 years since Amtrak’s Gulf Coast passenger train was knocked offline by Hurricane Katrina. Since then, we’ve seen 16 years of advocates fighting to restore this critical national corridor, 16 years of studies, 16 years of negotiations. All to restore just two trains per day -- just one train each way 12 hours apart.

CSX CEO Jim Foote sent a message to the railroad’s customers asking them to sign-on to legal action the railroad is taking against Amtrak to make sure that the “new service is not irresponsibly forced through.”

Sixteen years of advocacy. Six years of intense, data-driven studies by Amtrak and the Federal government. And CSX is alleging that this service restoration is being “irresponsibly forced through.” 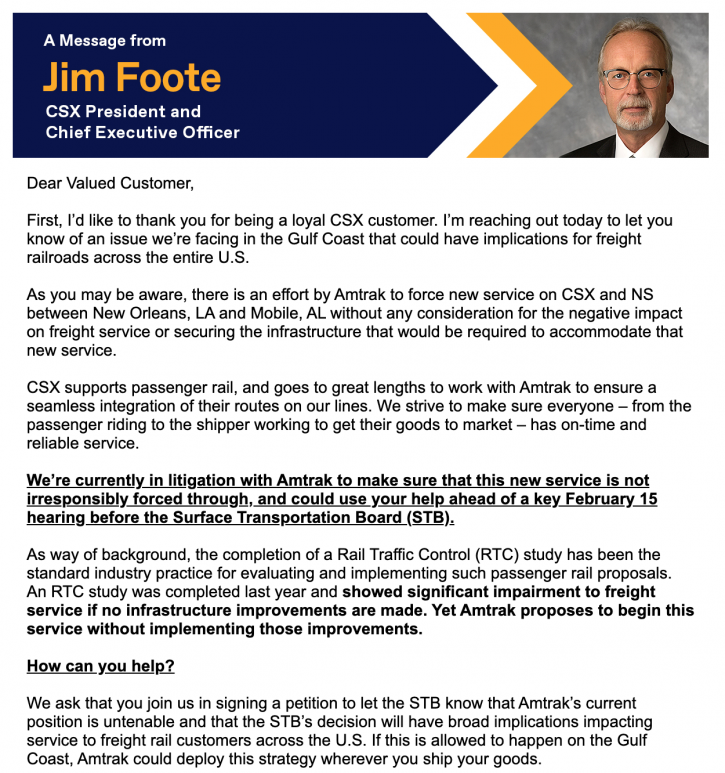 But why? Why are CSX and Norfolk Southern using the nuclear option for a single train on a small stretch of track between New Orleans and Mobile? A train that ran before 2005 without crippling their freight network.

It’s because they see the public excitement for new passenger rail services, the dramatic bipartisan increase in funding for passenger trains, and they will finally be required to live up to the agreement they struck when Congress bailed them out by creating Amtrak. They worry that this case will establish a precedent. A precedent that will allow states to start new rail services in a fair and timely fashion.

That’s the trouble with winning. Sometimes it brings out the worst in your opponents. And make no mistake, we’re winning. Seven years ago, we were debating whether Amtrak had a right to exist. Today we’re debating which of dozens of new corridors could get funded first from a pot of at least $66 billion – and perhaps as much as $103 billion – during the next five years.

But as you’ve heard us say before, we’re winning but we could still lose.

If the freights succeed in framing a decade’s worth of studies and negotiations to bring back a single daily train as a “smash and grab,” then our vision of a passenger rail renaissance in the U.S. is doomed to fail.

We’ve been saying all along, for years now, that the host railroads are acting in bad faith to block Gulf Coast restoration. Last night’s action from CSX fits that playbook.

For what it's worth, Amtrak came out swinging Friday after Thursday night's actions, noting that “Desperate attempts by CSX to scare their already-dissatisfied customer base is the same tactic they’ve used before: misleading their shippers, shareholders and the public. It is the kind of tactic used when the facts and the law are not on their side. The upcoming STB hearing will show that Amtrak has the right to use these tracks and the Gulf Coast community deserves to have passenger rail."

Congress has always intended that Amtrak would have the right to launch new services unless hosts can prove real harm. CSX wants it the other way around, which is not surprising since the DOT has already declared their evidence of harm ‘insufficient.’

Let’s be clear. The host railroads continue to benefit each and every year from the ‘Grand Bargain’ they struck in 1971 with the U.S. taxpayer, who pays some $2 billion every year to relieve the railroads of their common-carrier obligations in exchange for access to tracks and infrastructure.

So far, the evidence shows that the new Gulf service will bring many benefits, will only minimally affect traffic, and require relatively little in the way of infrastructure upgrades. This challenge led by CSX is not about 150 miles between New Orleans and Mobile. It’s about stopping the rail renaissance before it can gain any traction.

I expect to testify in support of the Gulf Coast restoration project before the Surface Transportation Board on February 15th. I’m hoping you’ll join me in voicing your support for this project, not only because the Gulf Coast is a worthy route, but because the decisions made about this project will set a precedent for every other new or expanded service we want to launch.

None of those things can happen, however, if CSX is able to stop this modest Gulf Coast restoration.

We’re asking passengers to sign on to our petition in support of the Gulf Coast train, and to communicate your support publicly! You should also know we’re taking additional steps to marshal support from our elected and appointed officials and partners around the U.S. to ensure that the Surface Transportation Board really knows the stakes as we head into this crucial set of hearings this month and in March.

"The support from the Rail Passengers Association, and from all of you individually, has been incredibly important to Amtrak throughout our history and especially so during the last trying year."